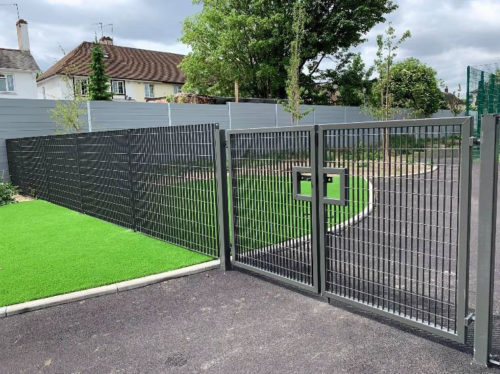 ABC Fencing were exceptionally happy to be chosen to install the fencing around Elenor Smith School.

ABC supplied and installed Louvred fencing around the school to create and strong and robust boundary but with the ability to be able to see through the fencing for better provisional properties. Louvred combines exceptionally stylish and modern panels with features designed to give the perimeter higher security.

Not only did we install over 200 meters of Roma 4 Louvred we also put Tilon Single Sided Reflective Acoustic Fencing where the school meets the houses. This was so the children could play on the playground at whatever noise frequency they liked as our Tilon fencing would reduce it by 10 decibels! We erected this fencing in two heights to fit in with the surroundings.

Lastly we supplied and installed a Louvred Bin Store in Italia 80 at 2.0 metres high to create a smart, secure boundary and practical outdoor storage space.