A move towards a simplified range of permanent perimeter protection and entrance control solutions will be the platform from which Heras can achieve strong growth in 2022.

The company – which was founded in 1952 and has grown to become Europe’s leading end-to-end supplier of permanent and mobile perimeter protection solutions – has been undertaking a wide-reaching review of its product portfolios to identify its most popular and adaptable ones to meet the changing needs of its customers.

Heras has always prided itself on having an extensive range of solutions for nearly every eventuality of a site’s requirements – but it recognises the benefits of having a smaller selection of solutions as part of a plan to further improve its speed and agility to fulfil orders, deliver projects and maintain the highest standards of customer service.

The Group Product Strategy Review was initiated by Heras Group in the Netherlands and included all 25 European territories where the brand operates.

The process has been a challenging one, as in the UK alone, the company serves sectors including transport and logistics, critical infrastructure and utilities, manufacturing and industry, governmental, public places and recreation, and retail and trade. And the review has covered demarcation (fencing/railing) and entrance control (gates/barriers/bollards/blockers) product portfolios.

Ian Crosby, Chief Marketing Technology Officer, said that offering a comprehensive range of products has previously sent out a very strong message to the market that Heras is a one-stop-shop provider of permanent perimeter protection and entrance control solutions – but it recognised that too much choice could present its own challenges for its customers.

“The Group Product Strategy Review has been a great opportunity for Heras to look at the changing needs of our customers and evaluate the process by which we present them with solutions,” said Mr Crosby.

“Having a more targeted portfolio of products will be at the heart of a drive to improve the speed and efficiency of specifying the requirements of a site – and then the timescale for installation – as part of a fundamental requirement to improve the Heras experience.” 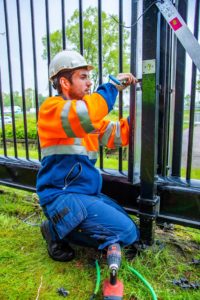 Heras, which has its UK head office in Doncaster, is also planning to use 2022 to embed two ground-breaking innovations that it launched last year.

Last summer, it launched the next generation of perimeter intrusion detection systems (PIDSs) to provide even greater levels of perimeter protection. These were developed for high-security sites (such as infrastructure of national or strategic importance) but are also used on sites such as transport and logistics hubs (especially where there’s high-value stockholding).

The two systems, GeoMic and GeoPoint – which both have pro versions – are designed to complement and greatly increase the overall effectiveness of both existing and specified perimeter protection fence and gate lines.

The other ground-breaking innovation that Heras launched last year and is currently rolling out is Connect – a cloud-based portal that offers real-time insights into the status of an entrance control system, including swing, sliding and bi-fold gates, with remote monitoring of user access and automatic alerts and notifications via smartphone, tablet or PC. It also enables users to open access systems via mobile phone, as well as enables Heras to provide remote and proactive monitoring of the systems.

Mr Crosby added: “2022 is going to be a very important year for Heras – not least because it marks our 70th anniversary – and the Group Product Strategy Review has been central to driving greater clarity from which we can deliver more-effective solutions that support our ability to speed up the whole process of giving customers an exceptional experience.”

Find out more at Heras here